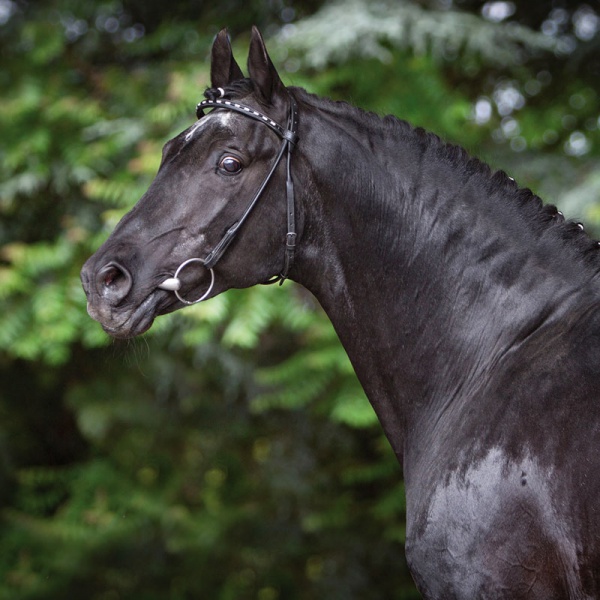 the stallion is free from WFFS

E. H. Sixtus is a typical black stallion in the ideal format and with the best division, a large-scale construction with a large shoulder and a good connection. Highest quality of movement with excellent activity of the hindquarters, a rare gift at the jump and a performance-tested and fertile blood guide make this stallion to a highly interesting athlete and sire.

His father Habicht was not only successful in the Military, but also winner of the stalllion performance test in Westercelle 1970 and the Central Stallion Show Schwaiganger 1977. Habicht is the father of a total of 16 licensed sons. The maternal grandfather, DLG winner Ibikus, was one of the best saddle horse sires in the Trakehner breed.

E. H. Sixtus was reserve champion of the licensing 1991 and was succesfull from 1995 to 1998 in  jumping. He scored a total of four victories in S-jumping and more than 50 placements in jumping.

With 138 points, he had the highest jumping index of all Trakehner stallions.

The offspring of E.H. Sixtus shows in the sport as a real exceptional talent. Overall, E.H. Sixtus got 308 offsprings registered in sport . Among them are up to the class S successful dressage, jumping and eventing horses.

His son E.H. Axis TSF was temporarily the most successful Trakehner dressage horse of the world. He was under the saddle of Terhi Stegars. Another example is Kawango, who twice became German Champion of the Para-Dressage Riders with Hannelore Brenner and was qualified for the Paralympics in 2016.

The main stallion of our stud enjoys 28 years of best health.

In 2010, the premium Mare Sixtina best four-year-old at the ZSE Hesse and best in the SLP Schlickau with the highest jumping score (8.25). In 2014 Valetta became reserve winner of the entry in Hesse. Olala, who has since been sold to the USA at the Stallion Market Auction, became a premium candidate there. A super jumping grade (8.5) got the premium mare High Honey in 2015 as well.
Also in 2018 scored his daughters. At the Central Mare Registration in Hohenahr, Hesse, two mares of E.H. Sixtus registered with 53 points each. Gloriosa from the Premium Mare Golda Meir by E.H. Münchhausen, bred and owned by Marika Werner (Mittenaar) has meanwhile passed the mare performance test with 7.9 and is a premium mare. Sixtana from the Shanara by E.H. Monteverdi from the breeding and the possession of Udo Schmittberger was also registered with 53 points and gets the premium with appropriate mare performance test. Sixtana, a close relative to Speedway, got the 8.5 for the free jumping, fortune and technique and was thus qualified for the free jumping cup on the occasion of the stallion licensing in Neumünster.

High Destiny became a premium mare and best jumping mare at the Central Mare Registration in Schleswig-Holstein. She comes from E.H. Sixtus from the state premium and premium Mare Haruka. Breeder is Dirk Kiewald from Heidekrug and owner is Margaret MacGregor from Nashville.

As athletes E.H. Sixtus offspring is highly successful. Among the 308 registered sport horses are up to the heavy class successful dressage, jumping, eventing and driving horses.

For example, Altefeld’s Rob Roy, the Bundeschampion Aussie horses 2002, Kasixta, the Trakehner riding horse champion 2002 and Karajan, successful up to S-dressage. And of course E.H. Axis TSF, who was crowned thirteenth in the World Cup Final in 2015 and was the most successful Trakehner dressage horse.

Skyjacker of E.H. Sixtus E.H. Cadeau is successfull at the moment. He is the fourth best Trakehner of his vintage. The former stallion candidate was victorious under his rider Sophie Leube in aptitude tests of the class A for riding horses with terrain and placed both in dressage and show jumping tests up to class A **.
Banderas and Spirit are currently in class S dressage tests.