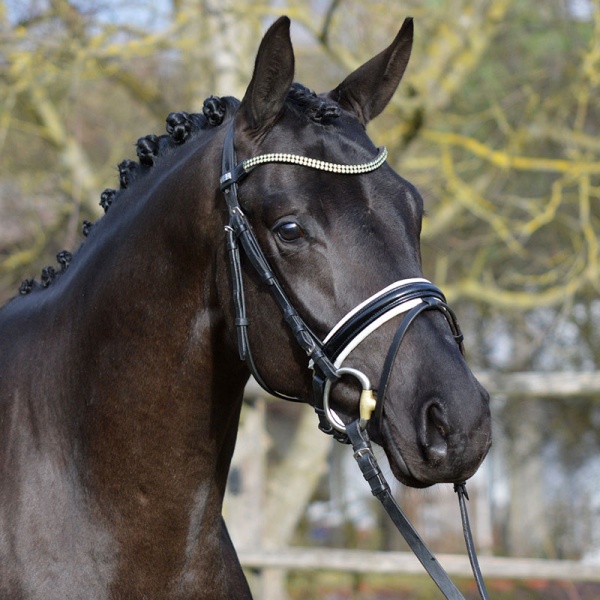 Kwahu comes from the breeding of Ines Eisold in Ahrensfelde-Mehrow in Brandenburg and was the most expensive foal at the auction 2016 in Neumünster. There he was struck to the estate Rosenau in Dreieich near Frankfurt am Main and grew up as a stallion prospect in Schäplitz, Saxony-Anhalt.

The black-brown young stallion, who retired at the licensing in Neumünster after the plaster pattern because of an acute hoof ulcer. At this point he was already discussed as a premium favorite because of his appearance in the preselection and on the triangle.

He was again able to live up to this assessment on the special licensing appointment. The licensing commission, consisting of Gisela Gunia, Dr. Hans-Peter Karp, August Camp and Breeding Director Lars Gehrmann, awarded the stallion as a premium stallion, which is possible according to the Board decision for several years on such dates. Already after the stallion market Kwahu had changed into the owners’ community Margit Eisner and Wolfgang Diehm. Now, the 14-day test is planned to get the decking requirement.

The breeding director described the stallion at the licensing as follows: “Unambiguously type-strong and expressively prepared premium stallion, who presents himself in a closed frame with lots of presentation and stable top line. This includes a good neckline, a pronounced saddle position and a well-formed hindquarters. The foundation is light, the hooves are still fit to the body. The step is regulated and expansive. Outstanding is the inrush and movement mechanics in the trot and canter, as well as the natural uphill, with the shoulder room from the upper arm is spectacular. Due to its body closure, the hind leg remains under the centre of gravity. Even when jumping free he moves with overview and type through the body “. During the stallion presentation at the Spring Licensing in Münster-Handorf in 2019, Lars Gehrmann again introduced the premium stallion: “This is an extraordinary Millennial Son, who has a genetic ideal connection in his pedigree through Münchhausen on the dam’s side”, the breeding director continued: “This basic rideability, This willingness to perform as well as the quality of movement are correspondingly impressive “.

Kwahu’s mother Kalinowska by Münchhausen is a daughter of the highly decorated Kasixta of the Hörsteiner elite stallion Sixtus. E.H. Sixtus is a typical black sorrel in the ideal format and with the best division, a large-scale construction with a large shoulder and a good connection. Highest quality of movement with excellent activity of the hindquarters, a rare gift at the jump and a performance-tested and fertile blood guide make this stallion to a highly interesting athlete and sire.

Kwahu’s father is the exceptional stallion Millennium. In the autumn of 2014, the second Reserve Champion of his licensing made an impressive debut as a stallion father and placed both in Neumünster and in Vechta (Oldenburg) with Sir Zanzibar and Morricone the champion stallion. The following year, Millennium delivered the first reserve winner of the Trakehner licensing with Helium and with Halleluja the second reserve winner. Both in 2016 (His Moment) and 2017, he once again delivered the champion stallion of the Trakehner Stallion Market. In addition, in 2017, a premium stallion in Verden and the Westphalian premium stallion Maracaná, who became the nationwide price spike. Even in 2018 hardly passed a licensing without a Millennium son. In Neumünster, Redefin, Marbach and Oldenburg his sons were rewarded with a bonus. Meanwhile, the number of his licensed sons has grown to over 40, which in his age no stallion managed in front of him. His daughters are also talkative. In 2015, Heavenly Brown was year-winner mare, daughter Belle Fleur made it in 2018, after she had already taken second place in the German mare championship.

Last year, the oldest descendants were six years old and collected first victories and placements in riding and dressage horse tests up to the World Championships for Young Dressage Horses.